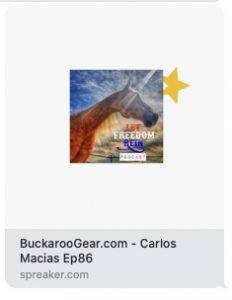 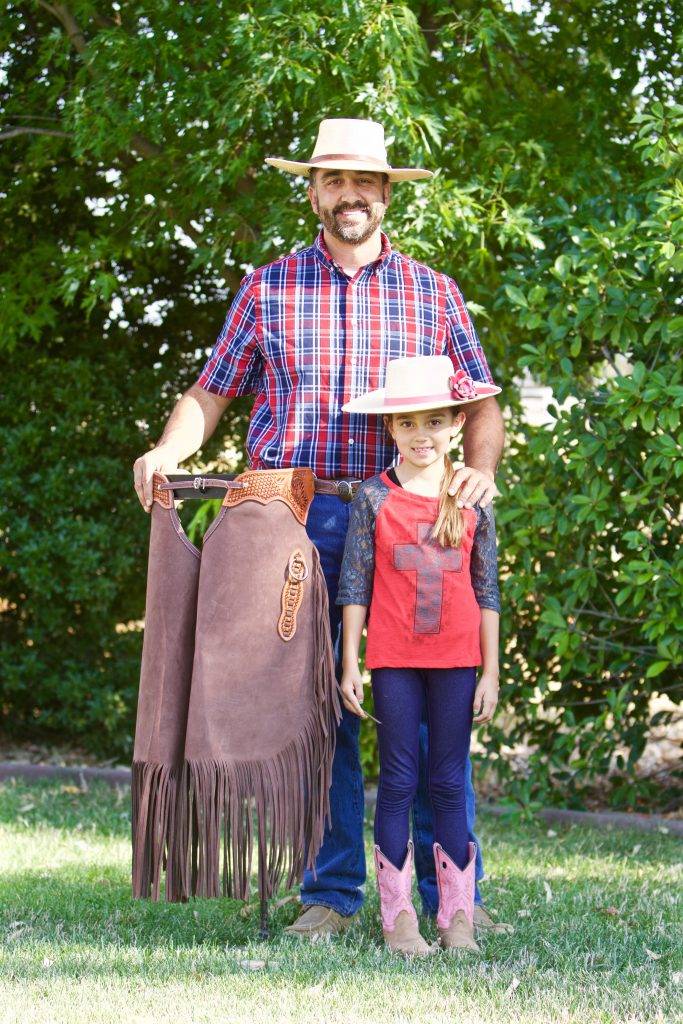 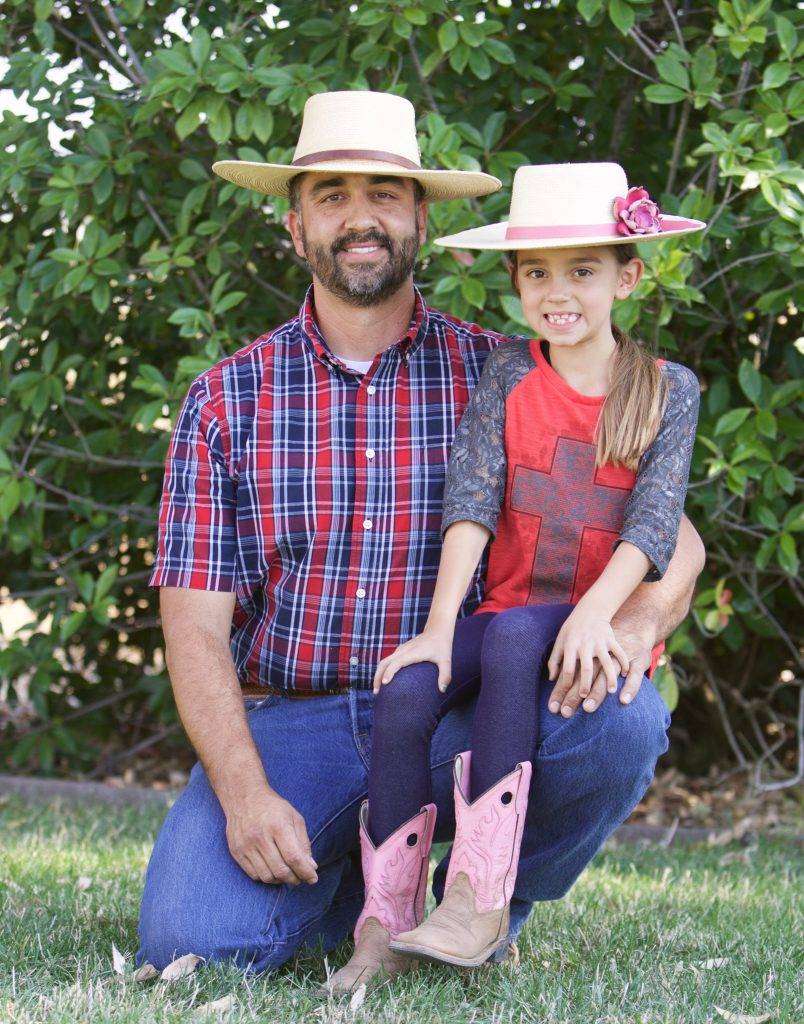 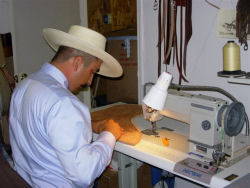 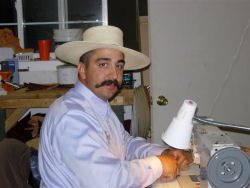 -July 12, 2019, 19 plus years down the road. In April of 2000 I dreamed up the concept of the first internet based Horse Tack & Cowboy gear store.. This was long before high speed internet.. (dial up was all we had). I can say with confidence LostBuckaroo.com was the first internet based horse tack / cowboy gear store of its kind. What is now known as Ecommerce (buying and selling on the web) was a very new concept in 2000. I later purchased and the BuckarooGear.com domain name just the dual names. In the first few years of business I was a reseller, buying and reselling goods from vendors.. In 2003 we were able to purchase land and build a home. With more space I was able to build a larger shop, and purchased a sewing machine..This is when I starting building gear. Specializing in custom Armitas, Chinks, and Chaps.. This now the mainstay of my business.

I grew up in what was once a small cow town. Elk Grove, California. Elk Grove is now a flourishing suburb of

California's capitol, Sacramento. The Sacramento area itself has a population that dwarfs the entire population of Montana. Not exactly my idea of a "buckaroo paradise" but, let me say this; California is much more than just the "Governator" Arnold Schwarzenegger, Hollywood, and Disneyland.

On the day I reached 14 years old, I met an old Nevada mustanger by the name of Jerry Lamb. Jerry was a hard man. It was with him that I had my first experience trying to ride a horse. I sat atop a roper saddle that was loosely cinched to a small grey arab mare, with Jerry chousing her around in a small roundpen. His attempt to teach me balance made my head, and neck sore, every time that little mare would gain a little speed the saddle would roll and I'd land head first on the ground. Eventually I was able to keep it in the middle and learn Jerry's version of "balance". Looking back I wonder how that little mares' back felt after I rolled the saddle on her time after time, she didn't have much whither anyway, I'm sure this is why Jerry choose her.

A year or so there after, through a high school R.O.P. program I met Ed Murphy. Ed is a cutting horse trainer, after spending 2 or 3 hours a day cleaning stalls and doing various other ranch duties, he'd give me a riding lesson on one of his old cutting horses. Ed is an old Nevada Buckaroo originally from Tonopah. I went to my first branding with him, we'd always go out and help the neighbors or area friends with their cowboying. It was through him that I learned about Buckaroos and the California influence on horsemanship. Ed is a good man and a true friend. Through him I also learned that the political performance horse world is not where I wanted to be. So with a little more knowledge I'd move on.

In 1995 I graduated high school and moved to Bozeman, Montana, to attend Montana State University. I learned a lot up there but not in class. Having never been anywhere away from home, Montana is where I grew up. There are a lot of memories in Montana. Those folks up there know how to have fun! I had too much fun, and college went on the back burner. My child hood friend Jeff Mundell, found me up there. Him and I were working on a horse ranch, on which the owner thought it to be good to experiment with a horse breeding program. Jeff and I started colts, the ranch owner had crossed all types of breeds. Adelusion/Quarter Horse, Belgian/Quarter Horse, PMU Mares/Quarter Horse. What ever cross you could think of we started it. The two of us were living in Jeff's 16ft camping trailer. No running water and an outhouse about 50 yards from the trailer. Montana winters in a 16ft camping trailer were fun. During one of the winters I heard of work at Double Diamond Halter Co. Shortly after I met Pete Melniker, the man who owns Double Diamond. He interviewed me standing in his shop. A warm dry place to work during the winter had great appeal. I learned to tie halters. Pete is good friends with Buck Brannaman. I learned about Buck Brannaman, Ray Hunt and Tom Dorrance through Pete. There was a corner saddle shop in Bozeman that rented Brannaman videos, Jeff and I would rent them and study them at the trailer on the horse ranch. The knowledge gained from the videos helped immensely with our colt starting. Pete & Sharon Melniker are still very good friends of ours and we try to get up to Montana once a year to see them. They also come down and visit us during the Californios.

In 1998 I moved back home. Lived with my Mom for about a month, that wasn't working out so I moved inwith Ed Murphy, and went to work for a Race Horse Trainer. John Clements is an older man, but was one hell of a saddle bronc rider in his day. He's the hardest working man I've ever met. I worked for him for a number of months getting his horses prepared to ride and under saddle shortly before they'd go out on the track for the first time. In between riding colts and day work, I went back to a local junior college to take computer science, and web design classes. I think was able to complete one semester of courses. I always started the classes but never finished them, I was too busy trying to make a living. However it was in one of these classes that the idea came to me to start the LostBuckaroo.com web site.

To those of you are repeat customers, or those who are just browsing our site for the first time, we want you to know we appreciate your business, and interest. -April 12, 2000 - Inception of Business Sweaty horse blankets and neglected gear I need to oil my saddle, and I probably should wash the mud and hair out of that cinch or butter up my bosal it has seen a better day."

How many times have you found yourself saying this?

In my life I have taken a lot for granted, mostly the good gear I have, and sometimes the better horses I've rode. I've often searched for a way to give back some of these things I have taken for granted. So I thought of this online store to make more easily available some of the gear that I use.

My main goal is too keep my overhead expenses down, so that I can keep prices low and keep you, the customer happy.